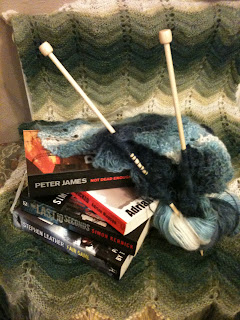 
I know I've been neglecting things here - holidays and a family bereavement are my excuse.

Anyway - progress report on the blankets - both of the large 'charity' blankets have been completed. 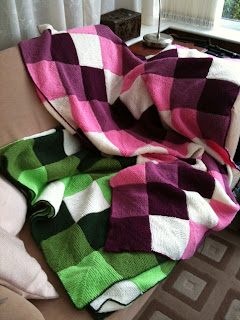 Alas, probably too late in the season for them to be sold at this summer's music festivals (even assuming that what passes for summer improves!) - but I can maybe sell them on eBay and donate whatever they fetch.

The remaindered yarn from these two projects was going to be used on a crocheted 'ripple' blanket - but instead I've decided I wanted something smaller to carry around so they're being made up up into 'granny' squares. 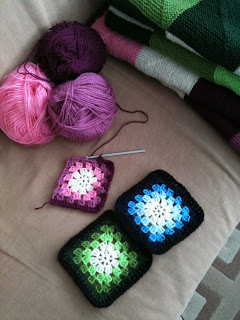 Our holiday in Ayr afforded us a trip to the New Lanark Heritage Centre - an 18th Century cotton mill that has been preserved and tours explain the process of spinning and how the whole enterprise created employment and accommodation for the surrounding populace (click the link to learn more).
They now also produce their own yarn so I splurged and bought some cotton/silk mix - not sure yet what I will create with it! 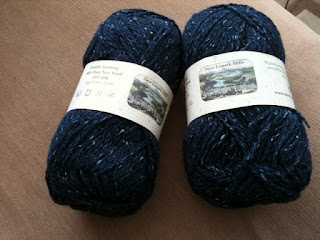 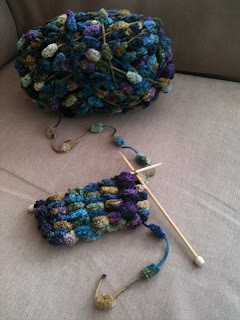 Having helped a (fairly) novice knitter by un-picking several rows of cable on a cardigan she was knitting for her daughter, earlier in the week, I've realised how long it's been since I knitted an actual 'garment'! I have an unfinished lace jacket in a bag somewhere that's crying out for attention, but I need some 'mindless' knitting for in front of the TV. After all, the (dreaded) Olympics will be upon us soon and I need a project to keep my hands busy whilst occupied with 'alternative' viewing - my daughter has declared her house an 'Olympic-free' zone, so we are planning to work our way through 'Band of Brothers' (an almost annual event), possibly followed by Downton Abbey (both series!).