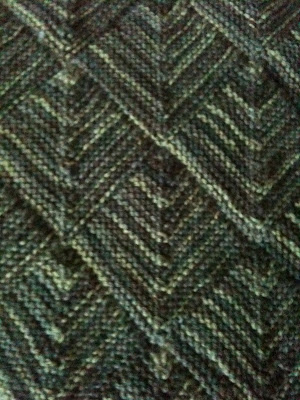 After the debacle of frogging an item last week I was hunting around for a new project. I have two or three WIPs at the moment but......you know how it is when you want to try something new...!

Anyway, I was thumbing through some old knitting magazines and came across a stitch/pattern that intrigued me, made of mitred squares.

Using some variegated yarn from my stash I was quickly knitting blocks of green (see pic at top of post) - delighting in the fact that each row grows shorter!

Then, I decided to experiment with blocks of colour. The stash pile produced this: 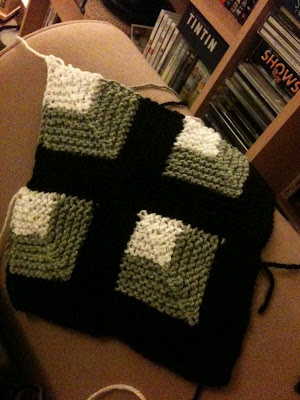 Appetite well and truly whetted I made a trip to our nearest yarnshop and stocked up on specific colours and this is the WIP so far: 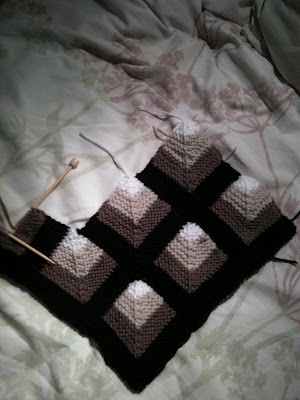 The photo doesn't replicate the colours so well, but basically I used black, mid-brown, fawn and white. I will try and get a better shot in daylight.

This will be an ongoing project to create a blanket - easy enough to do in front of the TV or at knitting group. Still, it looks effective. I'm already thinking of ways to tweak the original idea to create new ideas - I'll keep you posted!
Posted by SueH at 17:32 1 comment:

The other day I was casting off the last few stitches of a sleeveless jacket. It was knit in one piece (fronts and back all together, thus avoiding seams) so it seemed a little large, but I told myself it was because I was used to doing separate pieces. However, trying on the finished article proved my initial suspicions - the darned thing was way too big.

I couldn't understand it - until I realised I'd been following the wrong set of figures in the sizing brackets.....DOH! >:-(

As I sat frogging it out I was muttering away to myself about the lost hours I'd wasted - I really felt quite murderous!

So, as I haven't yet got any other projects ready to share here I thought I'd stick up one of the stories (from one of my other blogs) that earned me the moniker 'THE KNITTING ASSASSIN' - bestowed upon me by another blog-writing friend.


"Looking at it from his point of view, then yeah, I would be pissed also,” said Mary, behind the curl of blue smoke trailing upwards from the cigarette held vice-like between her elegant long fingers.

“Hmm, me too,” replied Carole, swallowing another large mouthful of wine from her glass.

“But to complain like that and then – oh, damn! Dropped another one!” Sheila hadn’t quite got the hang of cables. Mary laid her unfinished cigarette in the ashtray and leaned over.

“Give it here,” she said, beckoning across the table to Sheila. “Right, let’s have a look….oh, I see what you’ve done.” Deftly twisting the yarn backwards round the needle she worked her way back along the row of knitting and re-started. “Here you go, sweetie,” she said, handing the work back over the table. Sheila blew her an imaginary kiss in response and picked up the needles.

“Anyway, as I was saying, how could he complain about the way it was done? I think Petra did an excellent job!!” She patted me on the arm as if to reassure me. As the new kid on the block I was really just feeling my way.

“I guess he thought if he complained long and loud enough we’d waive the fee,” continued Mary. She exhaled another lungful of blue smoke as her eyes concentrated on the stitches she was counting along the needle of her own piece of work, moving them along in pairs with her immaculately manicured nails.

Carole laughed as she set down her glass.
“I don’t think he’d read the small print in the contract,” she giggled. The second bottle of wine was beginning to have an effect, I thought. Mary laid her work down and stared at me.

“Petra, you did make sure no-one else saw you?” she asked. Her face had lost it’s gentle look as her laser-beam eyes raked over me.

“Of course!” I retorted. “What sort of amateur do you take me for?” I tried to balance the tone of my voice to match a fair copy of the hurt I might be expected to feel. I picked up the pattern in front of me and made a show of studying it. Thankfully, all the hours spent with my Grandmother as a child had turned me into a fairly proficient knitter. Well enough, anyway, to fit into this group.

For the last three months I’d been working my way into their confidence, letting slip nuggets of information about my past ‘jobs’. My other special skill came in useful too - none of them is as good as me with a high velocity rifle.

There was an awkward lull in the conversation and all I could hear was the gentle rhythmical click-clack of knitting needles around the table. When I looked up Mary was still staring intently at me, whilst her hands worked in a blur of almost regimental precision, eating up the yarn trailing through fingers tipped with her trademark blood-red talons. For a moment I was wary, but then Sheila broke the silence.

“Mary, don’t pick on the kid!” she said in my defence. “When I drove up to collect her I made sure I wasn’t followed. In the distance I saw all kinds of birds circling over something, but I couldn't tell what from where I was and if I couldn’t tell it was Marian Hansen’s body then believe me no-one else would!”

No, she wouldn’t be able to tell it was a dead sheep and not Marian Hansen’s body because, in fact, Marian Hansen was now in protective police custody. The woman was safely out of the way, thanks to what I’d been able to glean from our cosy little “Stitch ‘n’ Bitch” evenings. We’d meet a couple of nights a week at Freddie’s Bar - an innocent little knitting group. No-one paid a blind bit of notice so we were quite effective at hiding in plain sight.

I hadn’t wanted to go under cover but it seemed I had the necessary skills to blend in – none of the guys on my team were willing to show their feminine side and confess to being able to knit. For once I was glad I was the only girl in the squad. But now I’m scared I might be slipping out of my depth.

You know that feeling when you wake up sweating and think 'thank goodness it was only a dream'? Well, when I wake up each day I’m starting to wish this was a dream. I just have to hold my nerve long enough and stay undercover to try and find out what they’ve done with Daryl Hansen.

To my mind, he deserves everything he might have got, having put out a contract on his wife for turning evidence. I know cops shouldn’t think that way but, hell – we’re not saints.

Mary’s staring at me again. Daryl pushed his luck too far with her, trying to argue his way out of paying as he didn’t actually get to see Marian’s body. I wonder which one of them did it?

Knit one. Purl one.

With her background in pharmacology Sheila could have poisoned him. Or Carole’s skill with a garrotte would have seen him quickly despatched. For a small woman she has immense strength in those pudgy fingers, which defies the logic of how she can create the most beautiful lacework stitching with such fine yarn.

Knit one, slip one, yarn forward.

No, my money’s on Mary. She likes sharp things. Stiletto heels. Long fingernails. Ice-picks. Daryl was probably perforated in some vital organ. Perhaps she even did a bit of probing with one of her spare knitting needles….

Knit one. Purl one.


(The original piece was part of a writing challenge with certain words/phrases that had to be incorporated - click here to see the original post and comments)
Posted by SueH at 08:58 2 comments: