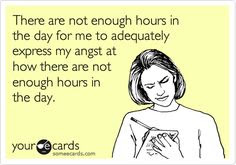 I used to laugh when I heard people say that after they retired they were were busier than ever before - now my hollow laughter has caught up with me, but in a good way!

I don't seem to get around to blogging much these days, partly due to a sudden flurry of family activity with folks moving house, and also the fact that I have got quite a lot of projects on the go all at once!

I've been tidying up my son's old bedroom (the one I've commandeered as my craft space!) and now he's at last moved into his new house I can start boxing up the last of his stuff to pass on. So this morning was partly about 'zoning' the place and deciding which crafty items to stack in boxes or display on shelves. 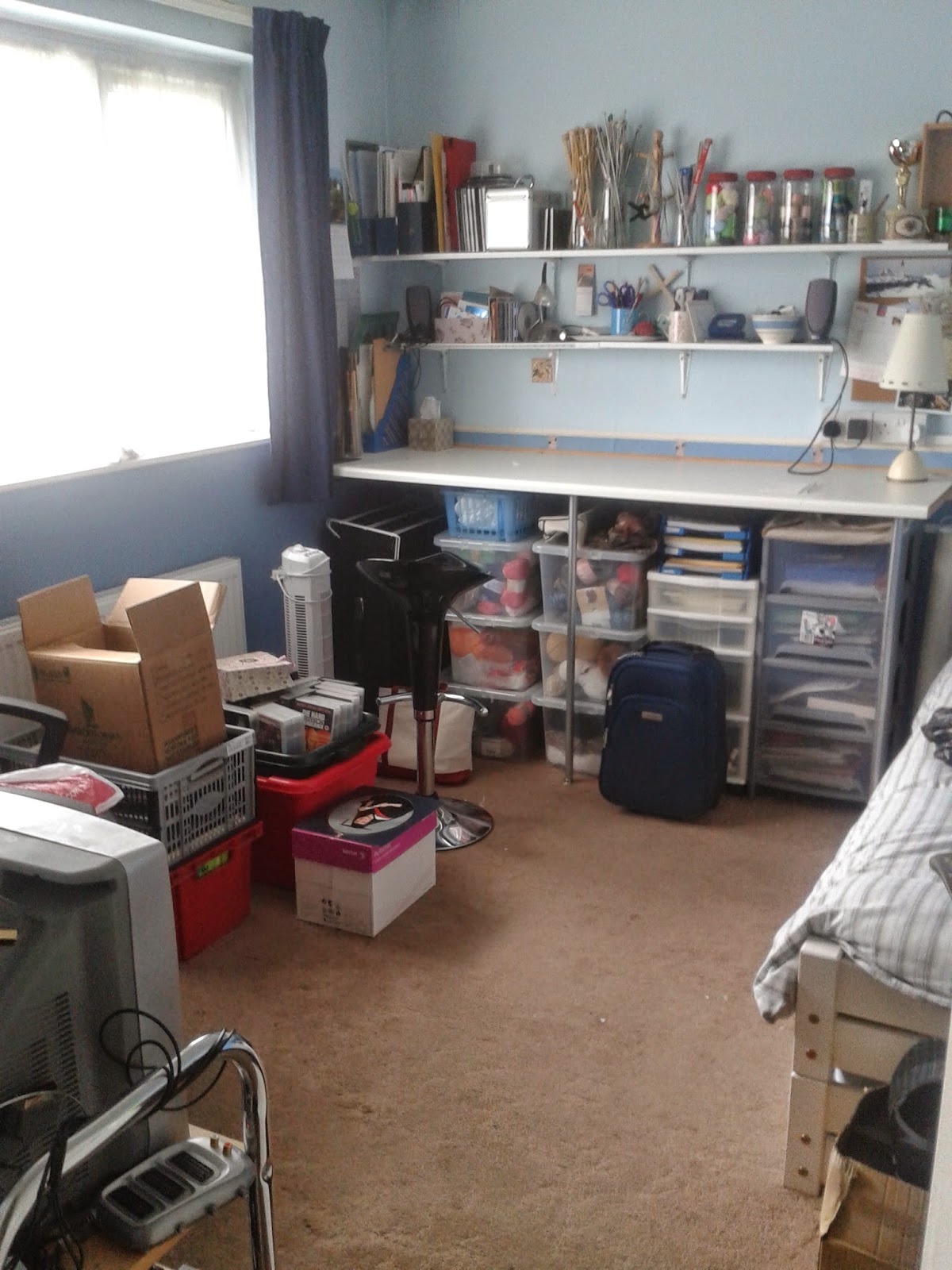 (still a few crates and boxes to move - but look! You can actually see the carpet!) 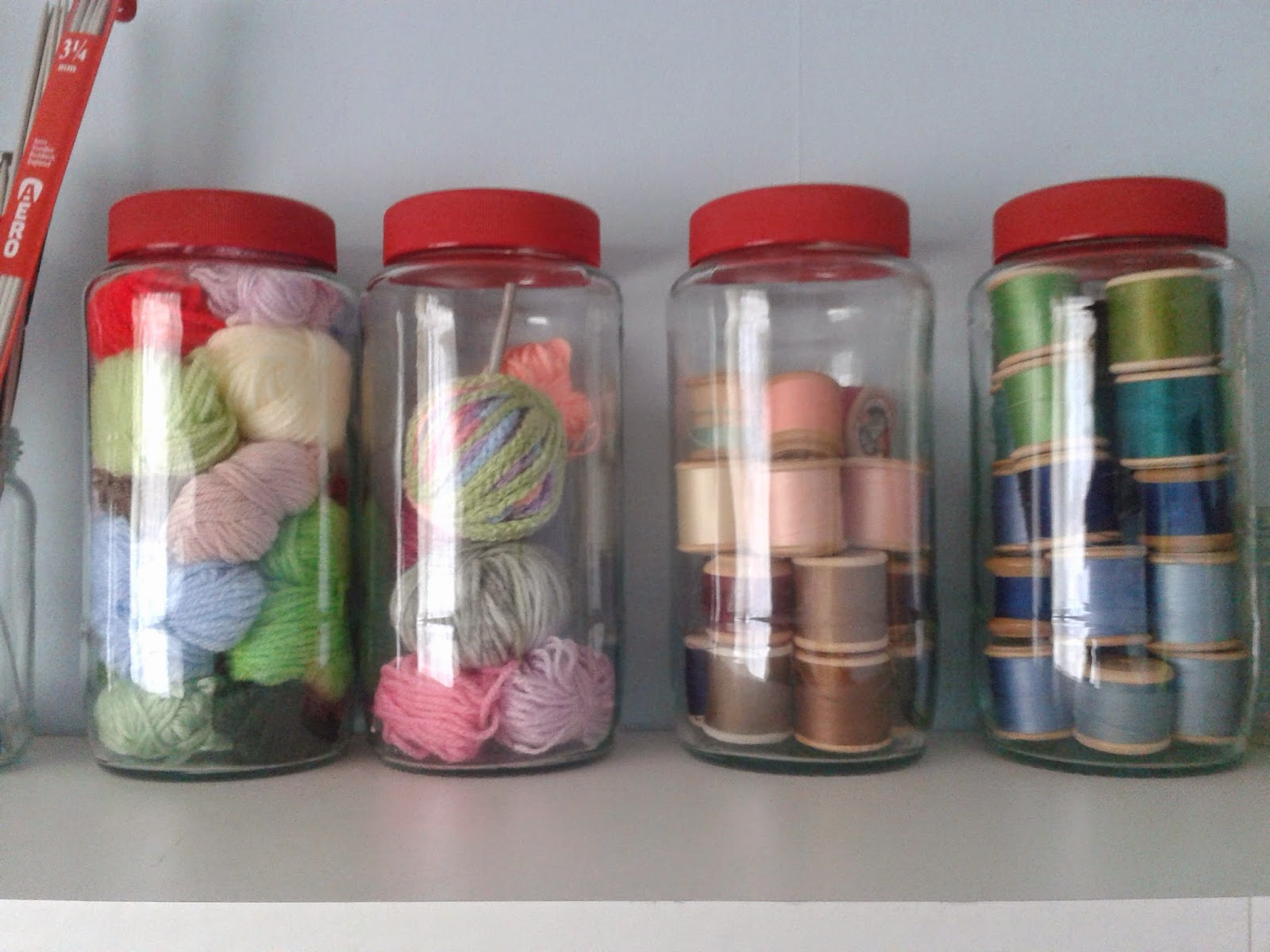 A good use for old coffee jars!


A couple of them house some of my small oddments of wool, balled up for one of my on-going projects: 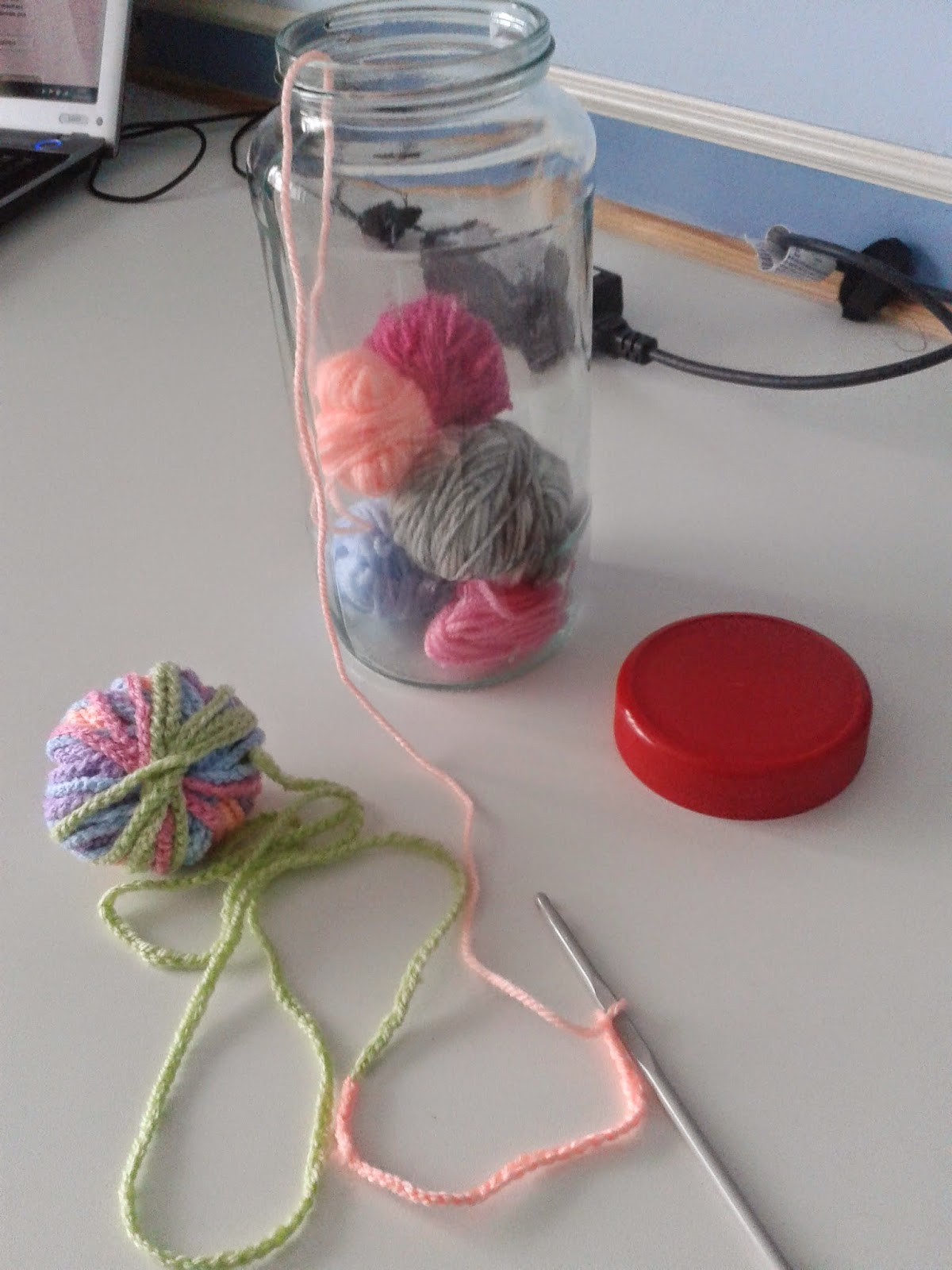 Crocheting scraps of wool to create a new ball of 'yarn'!
Eventually I shall probably crochet this into some kind of fabric.

In fact, as I was wandering about the house trying to gather up all my arty-crafty bits to
relocate them into my new purposed location I realised there are little
baskets and bags of projects scattered about  all over the place! 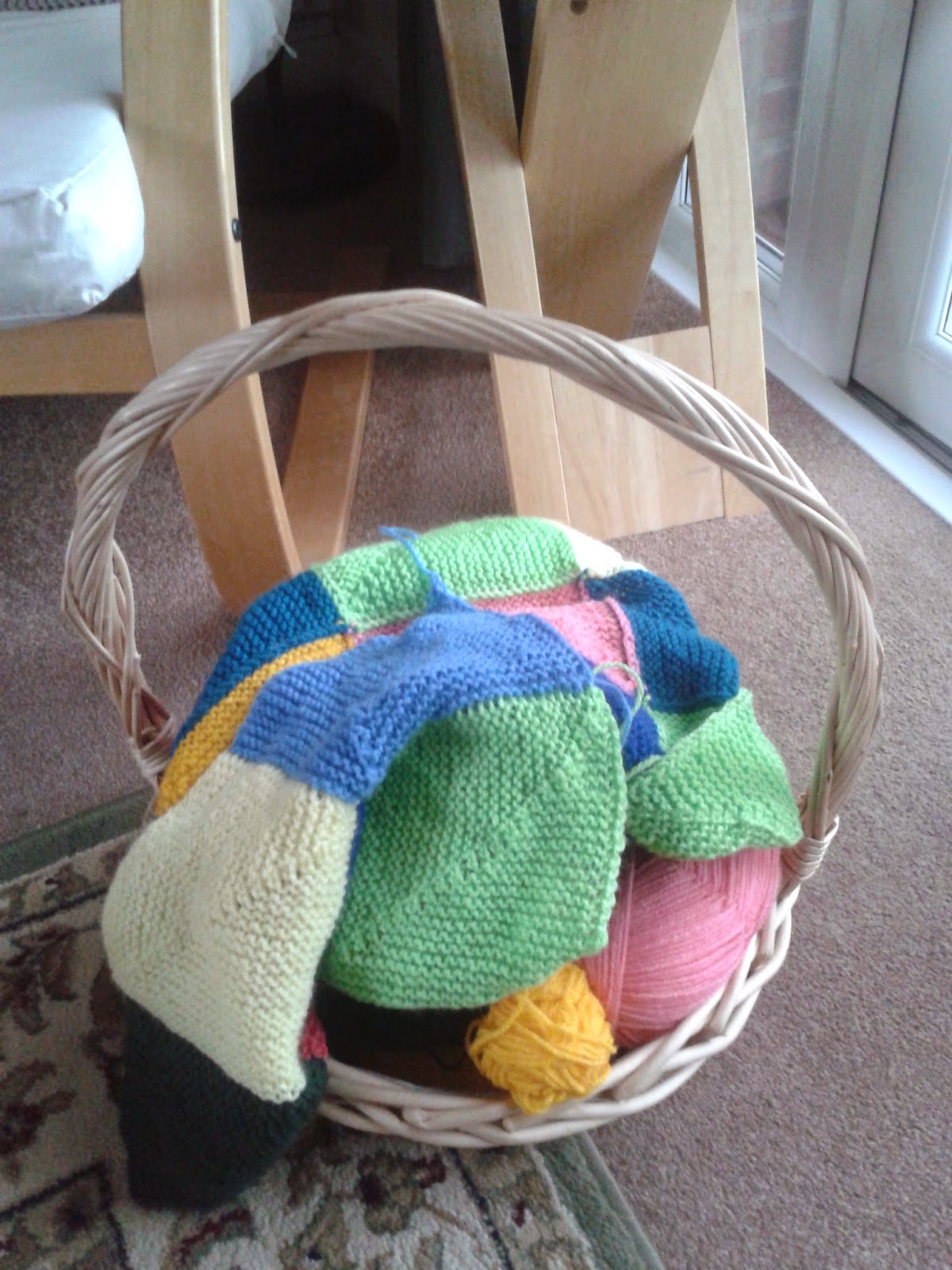 A mitred-square blanket 'growing' in a basket in the corner of the lounge
(excellent accompaniment for watching TV!) 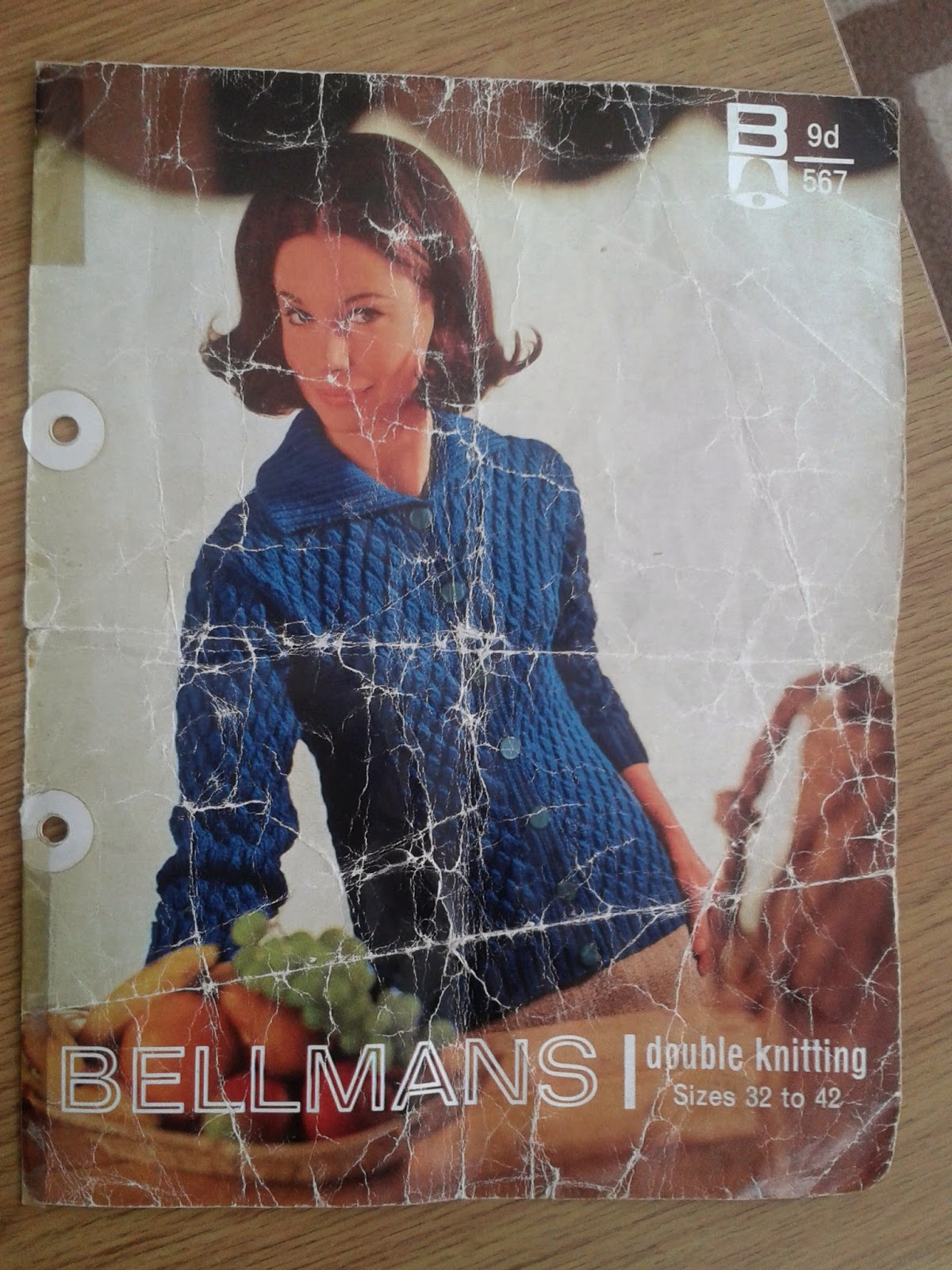 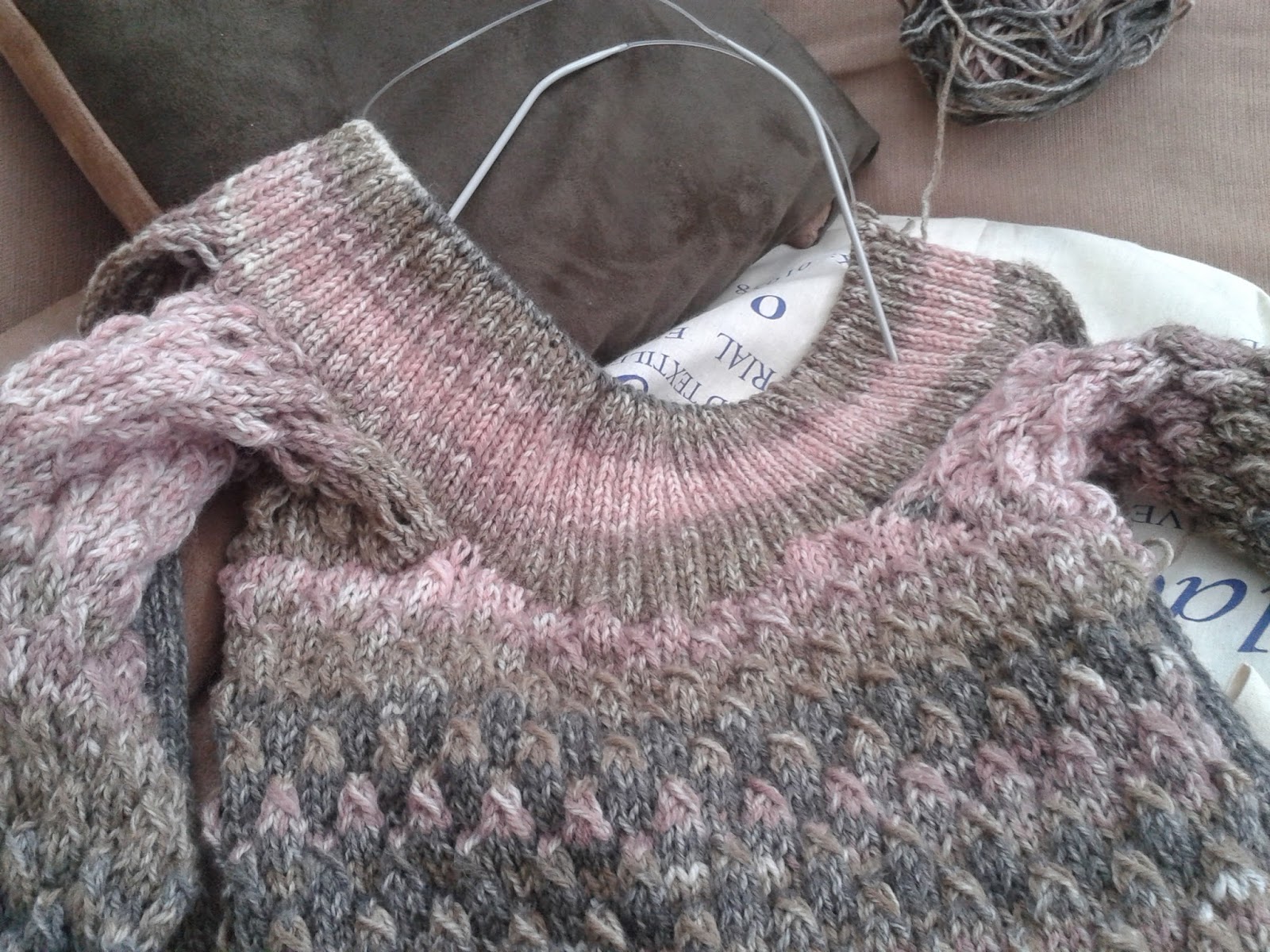 A jacket, sprawled over the arm of the couch in the conservatory  - I'm just finishing the collar - from a very old knitting pattern (the price on it is pre-decimal currency!) 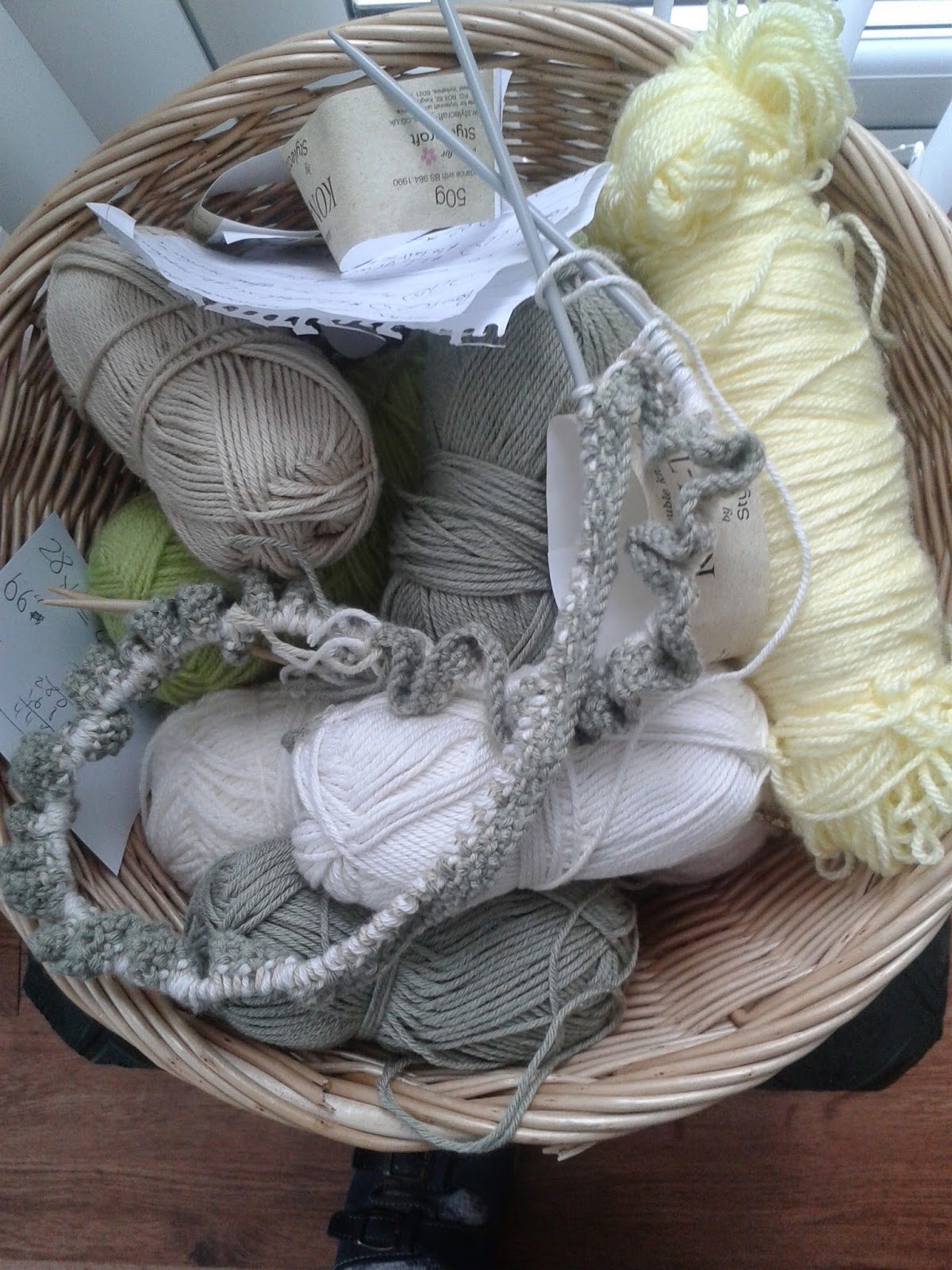 Lovely muted shades of DK cotton, 'nesting' in a basket by the window - I've just started a 'Mini-mania scarf'. I bought it on a recent trip to Barrow-in-Furness (because hubby wanted to watch football and I went along for the ride and instead found a wool shop!) only to discover afterwards that the yarn is now being discontinued, but I think there'll be enough here anyway. 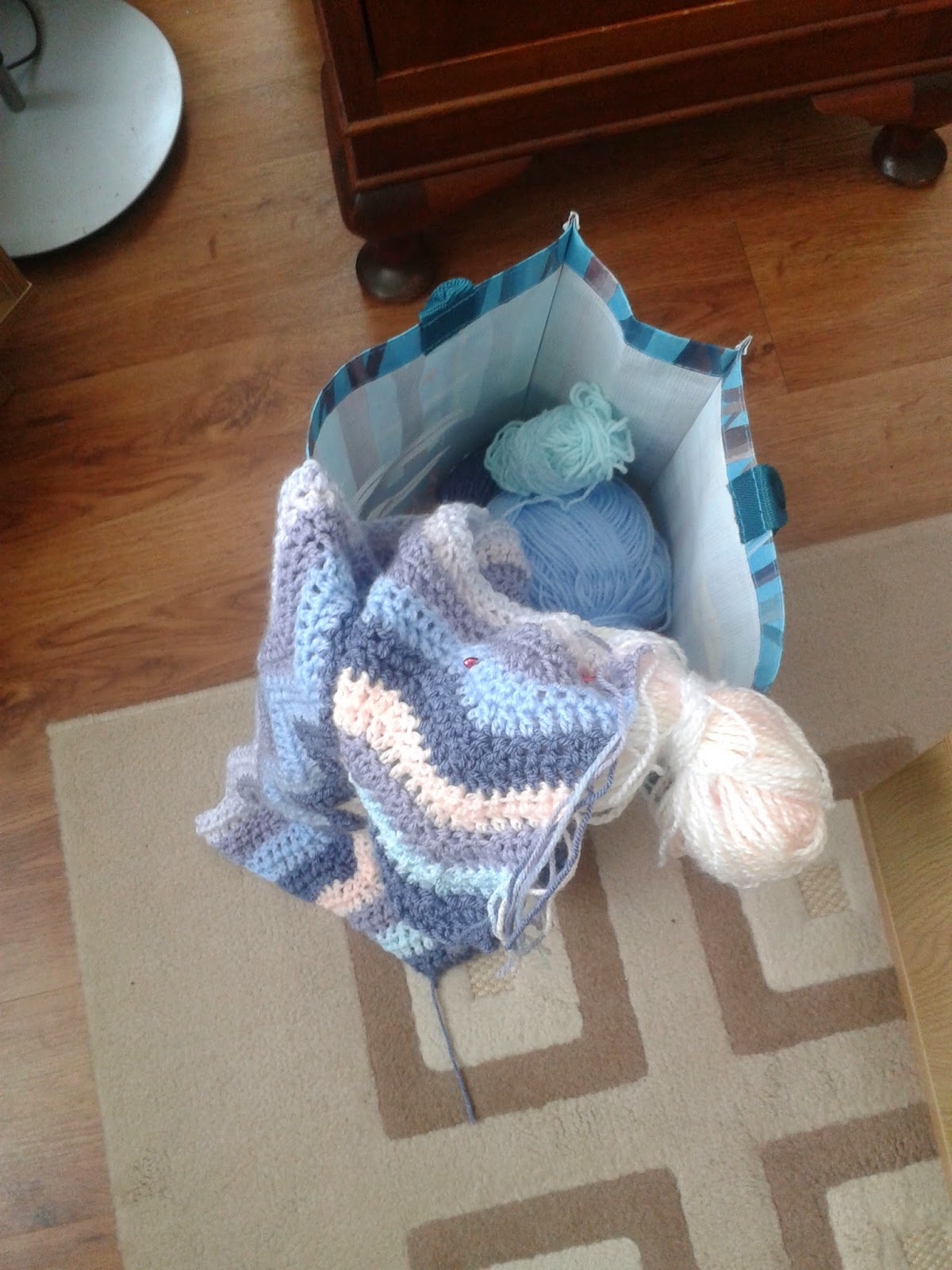 Another 'ripple' creation, spilling out of a bag - no idea what it will be!
(probably another blanket!) 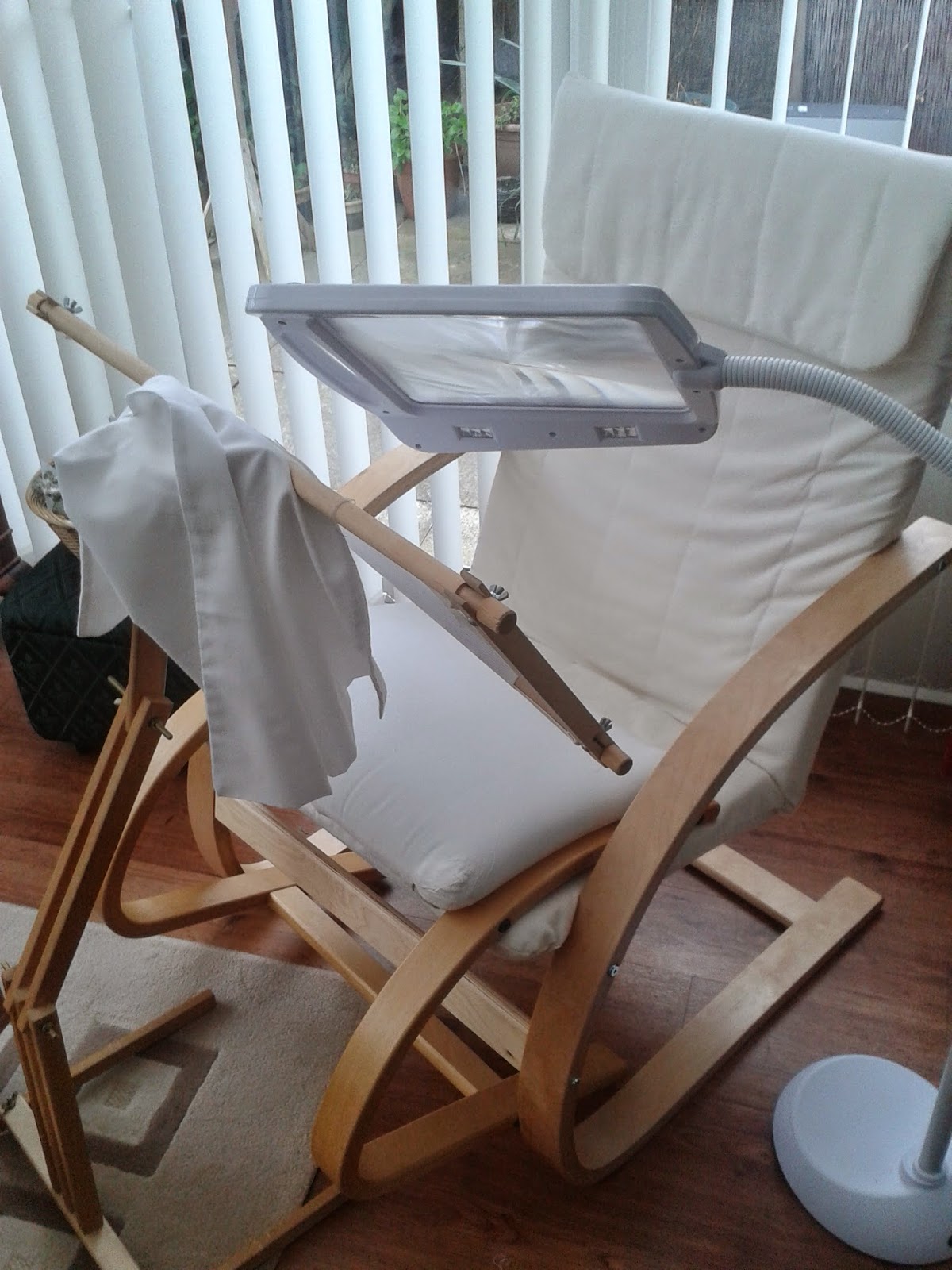 A recent acquisition was this magnifying lamp - maybe it will encourage me
to get on with the cross-stitch pattern I bought in America last year.....I do keep myself rather busy!

Aside from all this crafty stuff my other passion is Genealogy - and look what I've
just been given to look through: 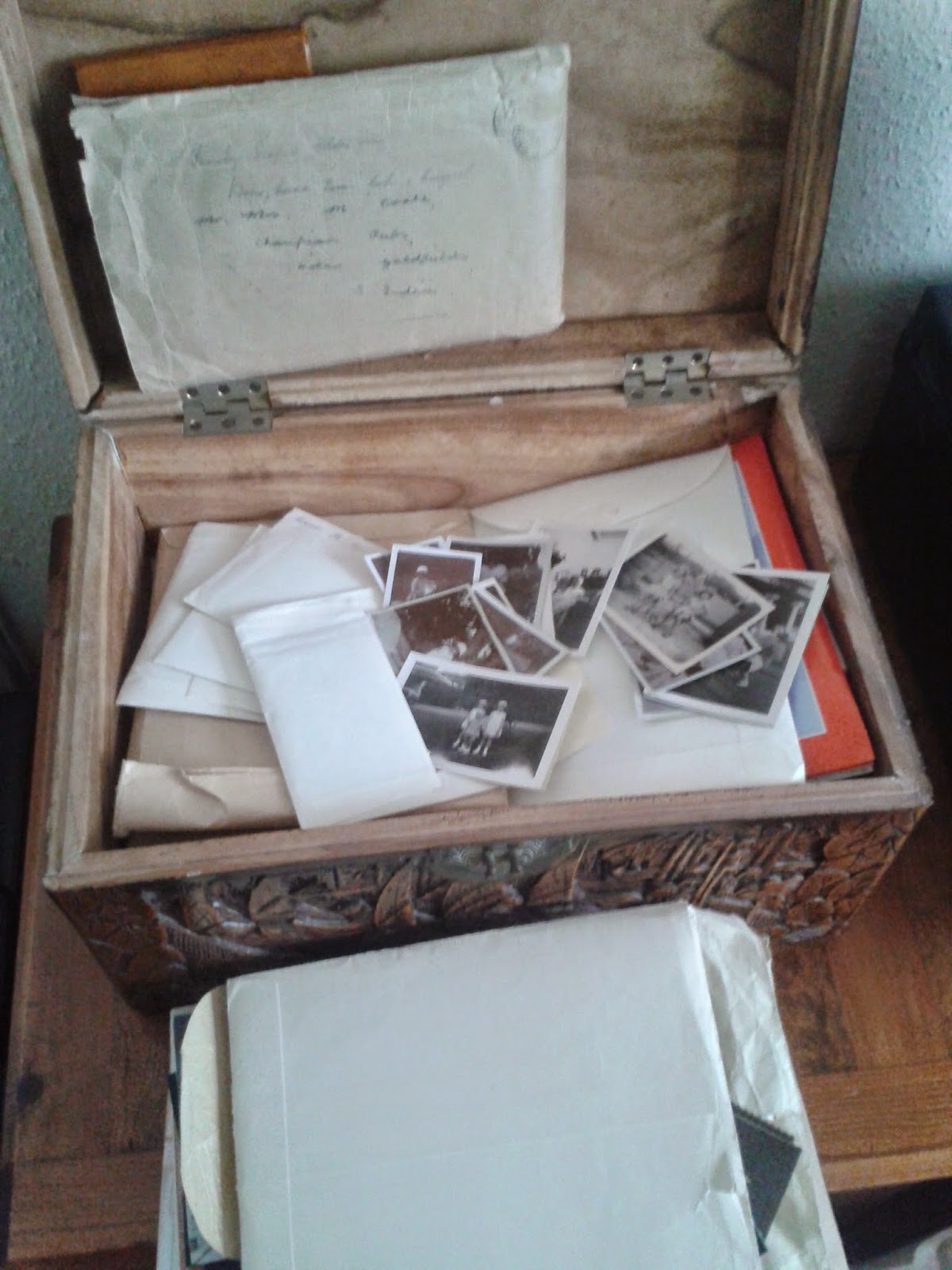 This is one of the boxes of old family photographs that my husband's elderly aunt has loaned me. Somehow I have to carve out some quality time to sort them out and scan them for posterity.

I've already digitised seven of her old albums - gorgeous old sepia-tinted pictures of  the family in India in the early days of the 1900's, right though to nostalgic black and white snaps from the 1930's. The fashions and glamour are right out of an episode of 'Poirot'!