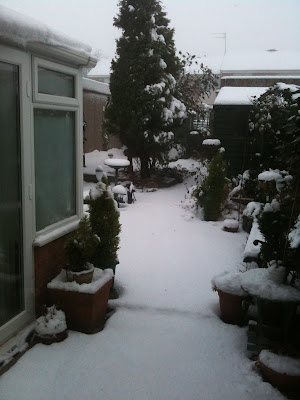 It's been positively Arctic here in the UK over the last few days! Needless to say, that has meant staying in the warm at every opportunity and catching up on boxed sets of DVDs and series on Netflix!

To accompany the constant supply of hot tea and visual stimulation I've been trying to keep my hands warm with a steady stream of yarn-action!

After the let-down of the knitting show daughter and I persuaded the OH to drive us over to Coventry (not for the faint-hearted - the ringroad is a nightmare and something I'd avoid at all cost!) last week to visit one of our local yarnshops. We propped him up in the IKEA coffee shop with a latte and a newspaper, whilst we headed across the road in search of soft and fluffy goodness (aka - yarn!)

I purchased some cheap and cheerful acrylic/wool mix yarn in shades of blue to make into yet another blanket. I really can't afford expensive yarn, so acrylic does the job - at least for large things like blankets.

So, back home, out came the hook and I was off crocheting a new 'ripple' blanket: 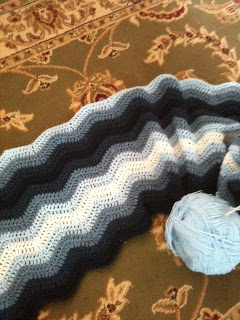 Unfortunately, some of the ball-bands didn't indicate yardage and I will need to go back for more! (a fair 'excuse' for a wee trawl around the shop for other items, I think!)

Although I love to 'ripple', I must confess that sometimes if I'm following an intricate plot on TV I find it hard to concentrate on both things, so I resorted to using up more of my small scraps of yarn in a mitred-square project: 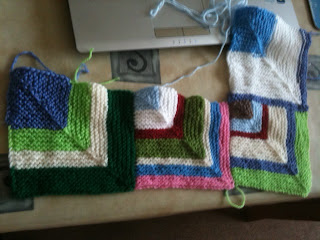 I call it 'Mitred Madness'!

Given the cold weather and the distinct possibility of our boiler giving up the ghost before we get the new one fitted, I really don't care what it looks like, as long as it will hopefully keep my lap warm!

As for the idea of combining 'Bargello' pattern with crochet (see previous post) - well, I'm still working on it, but I came across a pattern I picked up when I was in Michael's in New Hampshire a couple of years ago: 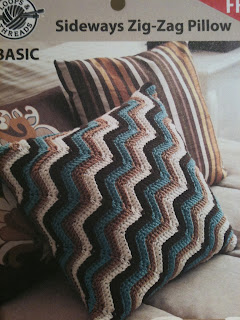 I think this could be interesting! 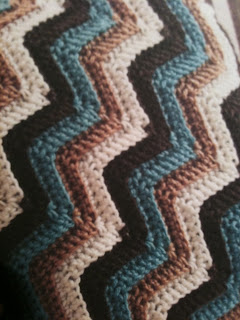 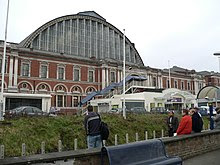 Well, I was REALLY excited about going to the Knitting & Sewing Show at Olympia Exhibition Centre, London - to the extent that I'd cleared the decks (see previous post) and got all my WIPs finished in anticipation of purchasing new goodies/projects to start!

Sad to say, I really was not that impressed with the show - it was no better than the Hobbycraft ones at Birmingham's NEC. I'd expected more of the big 'names' like Debbie Bliss and Louisa Harding to be represented but there was no sign of them and there weren't really many independent spinners/dyers at all. Considering the event was named the 'Knitting & Sewing Show' I'd have expected more. There was a fair amount of sewing items (mainly quilting) which was nice to see but I was more interested in yarn.

And WHY was there a stand selling very expensive chocolate????

In all honesty, I'll not bother to go again - the NEC shows are much cheaper and easier for me to get to, although in the past they've not had a great quantity of yarn purveyors. Then again, it's a while since I last went and it may have changed with the resurgence of yarncrafts.  Still, I've 'been and seen' so I know I'm not missing much.


I DID purchase some yarn though: 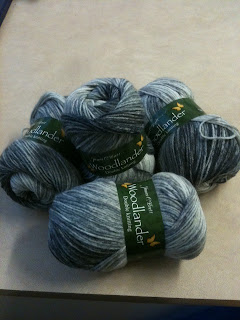 The colour doesn't come over well from the photo on my phone - in this particular colourway, think 'wolf'! I've no idea what I'll make from it, but I was pleased to actually see the yarn, having noticed it on Brett's website - there are some gorgeous colour combinations .  I plan to knit a swatch this evening to see how the colour graduation works - more later.

In the meantime I'm getting quite excited about a possible new crochet project! I really enjoyed doing my 'ripple' blanket and I plan to do others in particular colourways, rather than the random selection.

I'm currently trying to create a way of representing Bargello/Florentine needlework stitch in a crochet medium. I've done canvas chair covers and jackets in 'flame' stitch before, similar to this pattern: 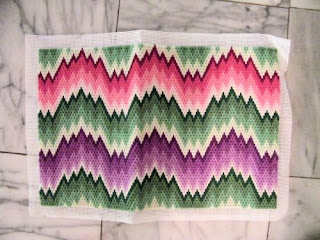 So, now I'm experimenting with 'peaks and valleys' rather than the gentle curves of 'rippling'. 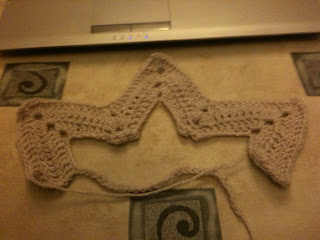 
Anyway, once more to the 'drawing board' and I think we're getting a bit nearer: 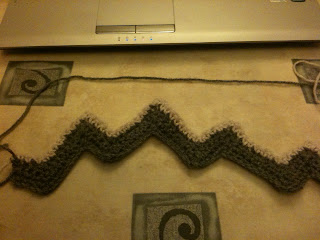 I'll be working on this over the next few days and share progress here. later!

PS. Just HAD to share this for any of you who haven't come across it!
( http://youtu.be/M6ZjMWLqJvM ) 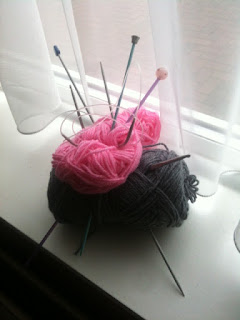 I've had rather a good run at finishing things off lately!

The 'ripple' blanket is done - and so snuggly and warm: 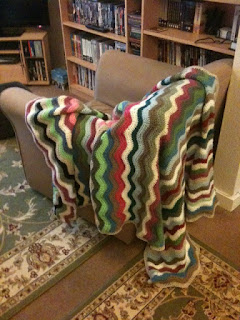 It was so easy, once I got the first line in straight and unpuckered!(see previous post) I'm keen to do more, maybe using several shades of one colour - the creative juices are still planning that one....

Whilst foraging for something (circular needles, actually!) I came across an unfinished pair of socks I must have started over a year ago and abandoned in favour of something more interesting. Still, out they came and I cast on for the second sock  - got halfway to the heel before I realised I'd made it in the wrong size, so I had to rip it out again :-/ Thankfully, using self-striping yarn I'd been able to see the bands of colour were narrower than on the original, because I'd used more stitches per round.


Back on the straight and narrow, and keeping those stripes equal: 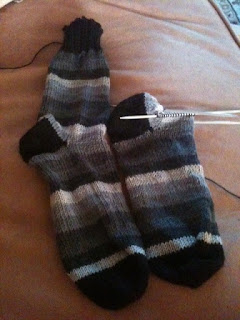 ...and here they are, finished! 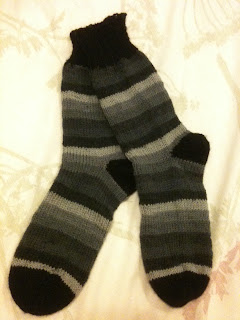 Next - the lace shawl I started months ago and conveniently put 'to one side'! A concerted effort (sequestering myself away in the conservatory for peace and quiet so I could concentrate on the pattern!) meant I finally got to the end of the lace border a week ago: 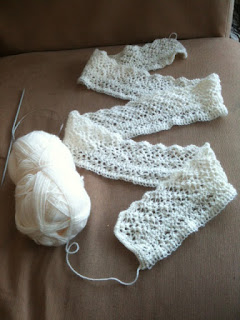 Then it was a case of picking up stitches along the edge (+280!!) and knitting the main body of the shawl: 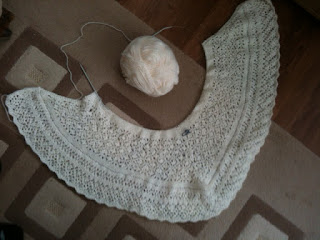 I cannot tell a lie - this was an absolute PAIN! The number of times I had to unpick rows and go back because the remaindered stitches didn't tally with the pattern....even now I'm sure there are mistakes but I just wanted the darned thing to progress! 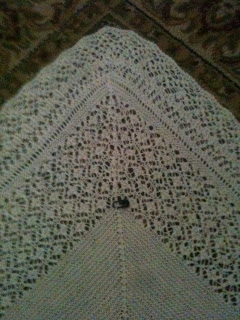 Still, I managed to get to the end of the lace pattern and heaved a sigh of relief as I reached the inner band of plain garter stitch (especially as I was catching up with 'PrisonBreak' on Netflix and wanted something simple to knit! ;-p)  Not much more to go now, I should get this done over the weekend: 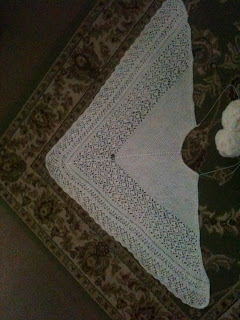 Mind you, it will take some blocking - it looks much different from the original pattern !

So, all I have left is an ongoing project using up remnants of sock wool - my 'scrap'scarf: 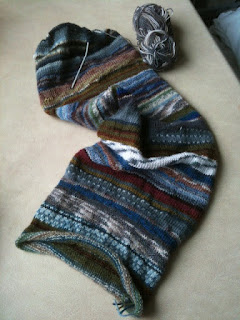 It periodically comes out for an airing when I've nothing better to do.

So, the decks are cleared just in time to be ready for new things - I'm heading off to the Spring Knitting and Stitching Show at Olympia next week and it will be nice to know that anything I buy can be started straight away, without embarrassingly having to lay other projects aside! (and I'll post about the show later!)